generated by the propeller and the mechanical power

required to spin the propeller are given by

is the density of air,

is the diameter of the propeller, and

is the angular velocity of the rotation. The power

is related to the mechanical torque

for spinning the propeller as

The thrust and mechanical power are thus related as

can be identified as the efficiency of the propeller, defined as

, and is obtained as

Comments: It should be noted that the coefficients

introduced here differ by constant factors from definitions found in the literature. It also should be mentioned that in general these coefficients, and whereby the propeller efficiency, can be dependent on the rotation speed

is delivered by the motor, which is reasonably well described by the classical motor equations, which in the static case read

are the motor constants (related to the KV value),

is the resistance of the wires, and

accounts for additional losses such as friction or iron core losses, and is typically rotation speed dependent. Common approximations are

, or in the simplest case just

is assumed (or a similar fixed relation in case of multi-phase motors).

, one immediately arrives at

With introducing a coefficient

one thus arrives at the main result of this article:

This equation implies that the thrust generated by the propeller can be estimated from measurements of the rotation speed and the current through the motor. For the purpose of compensating the thrust characteristic the absolute value of the coefficient

is irrelevant, as only normalized quantities would be used. For the same reason, the conversion factor from

is irrelevant. One thus arrives at the practical relation

is a normalized thrust and the dependence on

has been made explicit.

The derived relationship involves two approximations, namely the assumption of

and that the propeller efficiency

is constant and not dependent on the rotation speed, which both need to be justified or validated.

Comment: Note that the efficiency of the motor does not enter in these equations and is thus irrelevant.

it can be argued that for a good motor these losses should be small, i.e., that the largest loss contribution is the Joule’s heating due to the motor resistance

. If this is found to not be true for a particular motor, then this could be easily accounted for in the treatment by extending the above equation accordingly; one could e.g. subtract a current

from the measured current.

it can be argued that it’s value generally doesn’t vary much. For instance, in [SCH] the efficiency of a bad propeller was assigned to ca.

were found to be nearly independent on rotation speed, implying constant propeller efficiency. However, they are not totally constant. To conclude, this point is certainly a crucial factor potentially limiting the accuracy of the proposed method, and thus warrants further analysis.

According to the above relation, one needs to measure the rotation speed and the current through the motor, as function of the input signal to the ESC. Traditionally this would require building a dedicated measurement stand, and many such builds are described in the web, from simple to sophisticated.

However, thanks to the more recent development that ESCs themselves offer telemetry data, this task is enormously simplified, and readily available to everyone. One only needs to fix the copter to the ground, which for not too big copters is easily achieved by hands-on approaches, and spin up a motor with the propeller attached. In fact, the emerging availability of ESCs with telemetry, and that they typically report rotation speed and current, has inspired this whole work described in this article.

In my case I used a UC4H ESC node driving a KISS 32A ESC; for details on this setup please see Uavcan for Hobbyists: UC4H ESC-Actuator Node. The KISS 32A ESC does provide telemetry, which is polled by the UC4H ESC node in regular time intervals (e.g. 200 ms), and send out to the CAN bus, which is used to control the ESC node.

A Python script, making use of the PyUavcan library, controls the whole procedure (the script is available here): It ramps up and down the motor, e.g. three times, collects the telemetry data and plots them out, and finally uses the data to apply a fit to determine the MOT_THST_EXPO value, which is ArduPilot’s parameter for the internal thrust compensation. 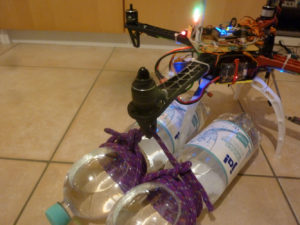 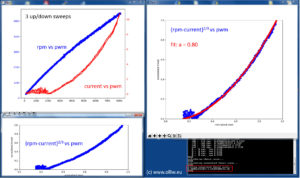