The aim of this project is to make RC transmitters which run the OpenTx firmware being able to handle the MAVLink protocol natively.

The project effectively turns the transmitter into a ground control station for operating your drone. That is, the transmitter not only allows you now to receive the most detailed telemetry data, but also provides a full, bidirectional MAVLink communication link with appropriate bandwidth to the drone and therewith the rich set of capabilities coming with this. For instance, you’ll find the project to offer unprecedented camera and gimbal control capabilities.

The project has several aspects:

Comment: I distinguish between drones and racers. As regards the communication link racers don’t need the same capabilities as drones do, in terms of bandwidth and bi-directionality, and the options available for racers can be considered sufficient. This is IMHO clearly not so for drones, and MAVLink is the protocol used by the de-facto standard open source drone projects PX4 and ArduPilot. And this is what this project is about.

This project is quite functional, but clearly, it is ongoing work. There is really soo much more one still can do and improve … 🙂

The following picture and video gives an impression of the state of affairs as of 15.Feb.2020: 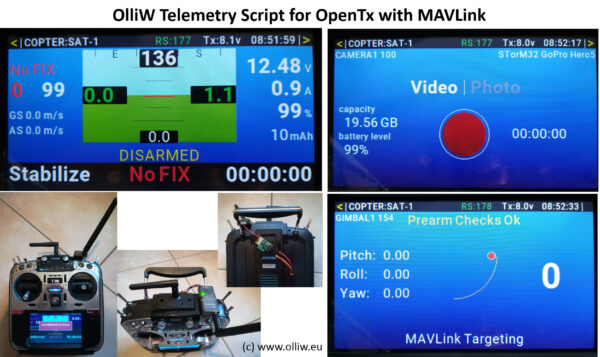 Comment: In this video I’m saying that the frequent loss of telemetry connections are due to being indoors. This is however wrong. I had upgraded the SiK radios to the latest firmware using MissionPlanner, which screwed it up. Flashing the proper SiK firmware resolved these issues. 🙂

This video demonstrates that it works in the „real world“, by means of a drone quick shot:

The idea to add MAVLink support to OpenTx is not new (see e.g. here, here). It also was extensively discussed ca 2 years ago here, and a first albeit very rudimentary implementation was pr’ed here, but both the discussion and the PR went stale long ago.

However, telemetry with sufficient data rate is obviously of great importance, especially for drones, and the currently available options to combine them with OpenTx-based transmitters are – as impressive works they are – little else than hacks and workarounds to get some of the functionality. The FrSky passthrough protocol is a good example. It needs special code on the flight controller, a special converter, the wiring is also not so nice, and the data rate is low. In comparison, MAVLink drone systems typically use full-duplex serial wireless links with baudrates of e.g. 57600 bps. Examples are the abundant 3DR telemetry units, Dragonlink and similar units, wifi-based telemetry units, and so on.

So, hardware-wise, all it really should need for installing the telemetry unit is to connect two Rx,Tx wires to the RC transmitter.

Anything else, like using additional modules to squeeze some of the data through the SPort pin, really doesn’t make much sense to me. I know that this view may not be shared by all, but to me this looks obvious. So I started this project, and arrived at the following concept:

Obviously, I considered it a strict requirement that one should not need any additional hardware like converters, and accordingly rejected any potential solution which didn’t comply with this. The good news is, this is indeed achieved.

However, some transmitters don’t provide suitable connections to the outside. In these cases one has to solder some wires to the transmitter’s main board, and depending on your soldering skills you may consider this very difficult or very simple. But that’s really all this project needs hardware-wise at most. Notably, OpenTx transmitters are available which expose an UART port to the user, such as the RadioMaster TX16S. These transmitters are perfect for the project.

Comment: The only OpenTx-based transmitter I own is a Jumper T16 Pro, and since it is my development platform the project is somewhat biased towards it. However, it has confirmed by rcgroups user Almi_ that it also perfectly works with the RadioMaster TX16S. In principle, it really should work also with the FrSky Horus.

The OpenTx firmware additions I’ve created can be described by three layers:

FrSky Sensor Mimicry: The incoming MAVLink messages are – as far as reasonable – translated into corresponding FrSky sensors. That is, a sensor discovery will find a dozen or so of sensors, which can then be used exactly like any „real“ sensor. For instance, they can be put on the screen, but also can be used in scripts as normal. The idea here is to provide a most simple access to the data and to allow us using it in familiar ways – hopefully your favorite script will just work.

MAVLink SDK: This is a higher-level interface to access the MAVLink functionality in scripts, and is really the main driver. The idea here is to make it as simple and convenient as possible to write a telemetry script. For instance, the rich functionality provided by the well-known Yappu FrSky Telemetry script can be realized by calling some simple Lua functions, but of course richer functionality such as camera and gimbal control or guided drone control is also provided. This set of functions is provided by the mavsdk module; that is, in the Lua script they are called as, e.g., mavsdk.getGpsLatLonDeg().

MAVLink API: This is a low-level interface to access the MAVLink functionality in scripts. It provides full access, and allows us to implement sophisticated ground control station capabilities, but it obviously makes writing scripts more difficult.

Comment:The MAVLink API is more difficult to implement, and it is currently effectively not existent. I need to spend more time on this.

My code additions to OpenTX can be found in my OpenTx fork. I also have opened a corresponding PR in the OpenTx github repository. Let’s see what happens with it 🙂

A further and important part of the project are practical Lua scripts. The cornerstone is the MAVLink Telemetry Script. On the one side, it re-implements familiar telemetry features, at least to some extend (and I want to acknowledge that the layout of this part is indeed much inspired by the Yappu FrSky Telemetry script!). However, it clearly also aims at adding new functionality such as gimbal and camera support, and other stuff.

As indicated in the above, no additional hardware like converters and such is needed, but some hardware work needs to be done. What needs to be done is to get access to Rx & Tx capable pins.

For the Jumper T16 one has to solder three wires (Gnd, Rx, Tx) directly to the transmitter’s main board. Two options are possible, the UART3 pins or the UART6 pins (the UART6 pins are accessible on the unpopulated Bluetooth module). I have chosen the UART3 pins, but you may prefer those on the unpopulated Bluetooth module area.

This transmitter exposes two UARTs on the bottom side. So, all you need to do here is to connect your telemetry link to one of them. Done.

The telemetry link also needs power, and what to do here really very much depends on which wireless link you are using. In my case (Jumper T16 and 3DR telemetry radio) I soldered two further wires to appropriate points on the transmitter main board.

The following video shows what I did with my Jumper T16 Pro:

The installation of the modified OpenTx firmware is simple.

The procedure is as follows:

I certainly hope that the code additions will eventually be merged to OpenTx, and that this chapter really becomes obsolete. However, that’s not in my hands or decision. We just can hope for the best 🙂

Also the installation of the OlliW Telemetry Script is simple, and essentially works as for all the other scripts out there.

The procedure is as follows:

The procedures are also described in this video: